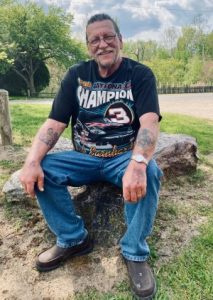 Steven Alan Holderman, age 65, of White Pigeon, died Saturday, Dec. 18, 2021 at his home after a brief illness. He was born in Three Rivers on Aug. 23, 1956 the son of Richard and Barbara (Curtis) Holderman, Sr. and was a lifetime resident of St. Joseph County. He attended Three Rivers Schools, and served in the Army National Guard. Steve had worked at Simplex Paper in Constantine, Weyerhaeuser in Three Rivers, and Hepner Tree Service. Most recently he was self-employed recycling scrap metal. Affectionately know as Sir-Elroy to some, he especially cherished time spent with his family.

Steve was married to Nickolette Duncan on May 14, 1999 in Constantine. She survives along with a son, Steven A. Holderman, Jr. of White Pigeon; two step-children, Thomas J. (Brittany) Urie of Ft, Myers, FL and Dustin J. Urie of Carson City, MI; a sister, Sara Holderman; two brothers, Terry Holderman and Doug (Diana) Holderman; sister-in-law, Tammy; and many nieces and nephews. He was preceded in death by his parents; a son, Austin Holderman; sister, Susan Baughman; and three brothers, William, Richard, and David Holdreman.

Graveside services will be at 12-noon Wednesday, Dec. 22, 2021 at Riverside Cemetery in Three Rivers with Rev. Kevin Brintnall, Chaplain at Grace Hospice officiating. Memorial contributions may be directed to the Eickhoff Farrand Halverson Chapel to assist the family with expenses. Memories and condolences may be shared with the family at www.efhchapel.com