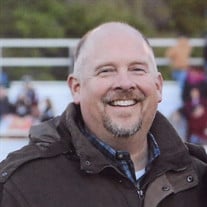 To know Tony Sehy was to know a person who was devoted to his faith and family. Optimistic and light-hearted, Tony modeled a genuine love for all people. A wonderful husband and father, he was incredibly blessed with a beautiful family supporting him every step of the way. Sadly, he is gone too soon. May his rich collection of memories be forever cherished for generations to come. His story began in 1970, a time when music continued to make a significant impact. The Beatles still topped the charts and the nation was on the verge of the Disco era. While many groups of Americans continued to fight for expanded social and political rights, Paul and Dorothy (Hitzeman) Sehy welcomed home Anthony on November 28, 1970, in Kalamazoo, Michigan. His birth brought great joy during an exciting time in our nation’s history. Growing up, Tony lived a typical childhood of the times. He loved being outdoors and from a young age was into music. As a teen, he was active on the football team as well as ran cross country and track. Graduating with the Class of 1989 from Vicksburg High School, Tony set off for Eastern Michigan University. He later transferred to Kalamazoo Valley Community College. It was while he was in the registration line that he met the love of his life, Kelly Boyer. On August 21, 1993 they were married. They shared a love of faith and were eager to start a family of their own. Together they raised eight wonderful children. Not too surprisingly, Tony was there to deliver their sixth child, Noel. The hospital had sent Kelly home thinking she was not ready to deliver, but Noel arrived in the family car! Luckily, Tony was a very hands-on dad with five kids already and the birth went smoothly. He treasured his time with his family and loved attending all the special events of the extended family over the years. His kids grew up with his breakfast burritos and always enjoyed seconds! They always felt supported and never doubted his love for them. A true romantic, he enjoyed writing love letters to his wife over their twenty-eight years of marriage. Many of their date nights include Mexican cuisine which was his favorite. All in all, he cherished his role as a husband and father. Tony led a very successful life. For more than thirty years after 8th grade, he worked as a professional DJ for many events. Always in high demand, he was fondly remembered by many couples for being the DJ at their wedding. He also owned and founded Key Media where he worked for over sixteen years and was a successful realtor for Khoury Real Estate. He loved spending his days off with his kids or going to the Kalamazoo Speedway to watch racing. An avid NASCAR fan, Tony followed Dale Jarrett before he retired from racing. Tony also had a love for playing board games with his children and their friends, as well as his nieces and nephews. Another thing that Tony loved to do was take his children to the zoo, children’s museum’s, the beach, amusement and water parks. One of his favorite pastimes was announcing for the Hackett Catholic Prep High School Band. Any time he could use his voice to cheer for his children, his favorite racers, or for the Irish band, his heart was content. Described as a hard worker who enjoyed being social and friendly, Tony was a generous person who lived his life to the fullest. He modeled treating everyone with kindness and compassion. Each and every person who knew Tony knew that his faith mattered to him as well as his special family. May his memories eternally live on in their hearts forever. Anthony “Tony” P. Sehy, of Schoolcraft, MI, passed away on Wednesday, December 15, 2021, at the age of 51. He is survived by his wife of 28 years, Kelly; eight children: Logan (Jewelee) Sehy, of Portage; Collin Sehy, of WA; Nathan (fiancée: Zoe Gibbs), of FL; Gavin, Ethan, Noel, Holden, and Calista Sehy all of Schoolcraft. He is also survived by his parents: Paul and Dorothy Sehy, of OH; two siblings: Joe (Cheryl) Saul-Sehy, of TX; and Nicole (Eric) Meli, of OH; siblings-in-law: Lawrence Boyer, of Holland; Rosemary Blade, of Kalamazoo; Teresa Boyer, of Kalamazoo; John (TaRay) Boyer, of Paw Paw; Mark Boyer, of Three Rivers; Elizabeth (Paul) Carra, of Three Rivers; Nicholas Boyer, of Lawton; Maria (Chris) Allen, of Kalamazoo; and numerous nieces, nephews, aunts, uncles, and cousins. Previously departed loved ones include parents-in-law: Phillip & Sue Boyer; siblings-in-law: Kathleen, Phillip, Eleanor & Steve Boyer. The family will receive friends on Sunday from 2 to 4 pm at the Avink, McCowen & Secord Funeral Home, Vicksburg. A rosary will be held on Sunday at 4 pm at the funeral home. A Mass of Christian Burial will be held on Monday at 11 am at St. Martin of Tours Catholic Church. Burial following at Boughton Cemetery. While at www.mccowensecord.com please take time to sign Tony’s guestbook and/or share a memory with his family. Those who wish may make contributions to the family c/o Kelly Sehy. The Sehy family is being cared for by the Avink, McCowen & Secord Funeral Home, 409 South Main, Vicksburg, MI 49097 (269) 649-1697.