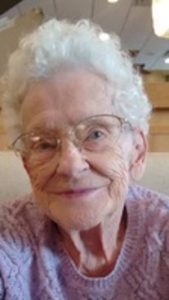 She was born September 28, 1928 in Battle Creek, daughter of the late H. Allen and Anona (Bubb) Nobles.

Mrs. Holton resided in Sturgis since 1947 coming from Olivet, Michigan where she was a graduate and class president of Olivet High School with the class of 1947. She furthered her education at Olivet College where she studied drafting.

She married Robert Holton who preceded her in death in 1997.

Mrs. Holton retired in 1994 from the Paramount Furniture Company in Sturgis following 46 years of dedicated employment.

She was a member of the Howe United Methodist Church in Howe, Indiana. She was also a life member of Order of Eastern Star Olive Branch #2 and past president of the South West District Association of Eastern Star.

Mrs. Holton was a talented artist and graduate of the Norman Rockwell School of Art. She enjoyed painting and drawing and crocheting.

She was preceded in death by her parents; son: Toney Holten; husband; two granddaughters: Jessica Holton and Mattea Holton and one brother: Charles Nobles.

The family will receive friends from 10:00 to 11:00 A.M. Saturday at the Hackman Chapel of Hackman Family Funeral Homes, 114 S. Nottawa St. in Sturgis where funeral services celebrating the life of Virginia L. Holton will be held at 11:00 A.M. Saturday. Virginia’s son-in-law: Allen Barnhart will officiate. A graveside committal will follow the service at the Riverside Cemetery in Howe, Indiana.

Memorial donations would be appreciated to the Howe United Methodist Church, 511 S. Third St., Howe, IN 46746.

Relatives and friends are encouraged to share memories and condolences at www.hackmanfamilyfunerlhomes.com.