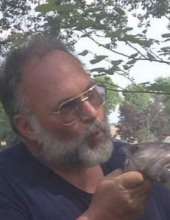 David Scott Deam, age 63, of Sturgis, passed away Monday afternoon, January 10, 2022 at Ascension Borgess Hospital in Kalamazoo.
He was born January 27, 1958 in Sturgis, son of Vern and Roberta (Combs) Saddison.
Dave was a lifelong Sturgis resident and a graduate of Sturgis High School with the class of 1977.
On August 25, 1984 he married Kim S. Corwin in Sturgis.
Dave was a talented and gifted fabricator. He owned and operated D&D Custom Repair in Sturgis. He also worked at Grumman-Olson in Sturgis for 13 years.
He was a member of the Converted Coach Owners Club and enjoyed fishing and most anything relating to tractors. He loved restoring automobiles and was nearing the completion of a 1946 Dodge.
He is survived by his loving and dedicated wife of 37 years: Kim; two daughters: Michelle (her fiancée: Randy Dodson) Deam of Sturgis and Stephanie Deam of Schoolcraft; his mother: Roberta Saddison of Sturgis; one sister: Sally Deam of Three Rivers; one brother: Harvey (Judy) Deam, III of St. Joseph and several nieces and nephews.
He was preceded in death by his father; sister: Sue Dearduff and brother: Terry Lee Saddison.
In accordance with his wishes cremation has taken place. A gathering of family and friends to celebrate and honor the life of David Scott Deam will be held at a later date to be announced.
The Hackman Family Funeral Homes of Sturgis is entrusted with the arrangements.
In honoring Dave’s love for animals the family suggests those wishing to make a memorial donation in his memory consider the St. Joseph County Animal Control, 652 E. Main St., Centreville, MI 49032 or Animal Rescue Fund, 1115 W. Michigan Ave., Three Rivers, MI 49093.
Relatives and friends are encouraged to share memories and condolences at www.hackmanfamilyfuneralhomes.com.