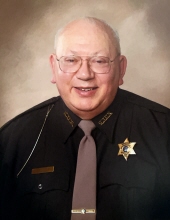 Eugene Alli, known by his grandchildren as “Papa” of Sturgis, passed away peacefully on Wednesday, January 5, 2022 surrounded by his family at home. He was 81 years old. Eugene was born on March 28, 1940 in Detroit, son of Nur Edris and Stephania Juliana (Romanowski) Alli.
Eugene enlisted into the Army on July 23, 1958 after graduating from high school in Fraser, Michigan. He went to Fort Knox for Basic Training after being sworn in at Fort Wayne, Detroit. After basic training he was stationed in Fort Gordon, Georgia for MP training. His first MP assignment was at the 559th MP Company in Fort Monroe, Virginia. He arrived at Fort Monroe around Christmas Eve for approximately one year until 1959. He was then stationed at the U.S. Army Medical Hospital in Landstuhl, Germany. After he finished his service in Landstuhl he was sent back to Ft Dix, New Jersey for about 4-5 days until his honorable discharge from the military. He was discharged from military at E-4 Specialist 4th Class. He received an Associates Degree from Washtenaw Community College, Bachelor of Arts Degree from Detroit Mercy College, and Master of Science Degree from Central Missouri State University. He was a graduate of the 135th Session of the FBI National Academy in Quantico, Virginia. He served as a law enforcement instructor at the Washtenaw Police Academy and the Detroit Police Academy. Eugene is a lifetime member of the Michigan Association Chiefs of Police.
Eugene got his first police job on Feb 5, 1962 with the Howell Police Department. He worked there until 1963. He served with the Livingston County Sheriff’s Department from 1963 until 1965, Fenton Police Department from 1965 until late 1967, and then returned to work at the Livingston County Sheriff’s Department. In 1968 he began working for Washtenaw County. From 1968 until 1974 he worked for the Washtenaw County Sheriff, until appointed Chief of Police in Brighton, MI where he served from 1974 until 1984. Eugene worked in Morrice for one year before joining the Sturgis Police Department where he served as Chief from 1986 until his retirement in 2004. Immediately after his retirement he joined the St. Joseph County Sheriff’s Department where he remained a deputy from 2004 to the present. Eugene also owned and operated Alli Investigative Agency as a private detective for many years. Throughout his law enforcement career he caught bank robbers, serial killers, met two Presidents, stopped runaway trains, earned countless awards and saved many lives.
Above all he was most proud of his family. He is survived by his loving wife Trudy. They were married February 10, 1962 at St. Veronica’s Catholic Church in East Detroit, Michigan. He is also survived by his children David (Lara), Shelly (Matt), Lisa (Denny), Brian (Julie) and Eric (Jaime), 17 grandchildren and 5 great-grandchildren.
In accordance with his wishes, cremation has taken place and no services will be held. A private memorial celebration of life will be held at a later date. The Hackman Family Funeral Homes of Sturgis is entrusted with the arrangements.
The family suggests those wishing to make a memorial donation in his memory consider the Michigan Department of Technology, Management and Budget, Financial Services, Cashiering Unit, Law Enforcement Memorial, P.O. Box 30681, Lansing MI 48909-8181