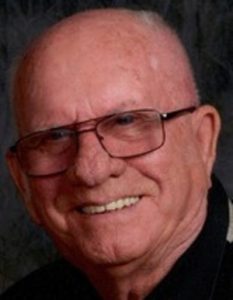 Harold “Andy” Dean Gump Sr., age 83, of Bronson, passed away Saturday, November 20, 2021 at his home surrounded by his loving family. A private burial of ashes will be held at St. Mary’s Cemetery in Bronson. The family will host a celebration of life for Harold next spring.

He was born February 16, 1938 to Clarence and Bernice (Metzger) Gump in Bronson. Dean was a graduate of Bronson High School; on February 27, 1960 he married Patricia Kulpinski and she survives. Harold had been employed at Ross Labs in Sturgis for 35 ½ years throughout its transition into Abbott Labs and up until his retirement in 1993. He was a member of St. Mary’s Catholic Church as well as the Ross Golf Club. Dean was dedicated and hardworking but he always made sure to find time for the joys in his life whether it was golf, hunting, fishing, camping and most of all farming. He was a reliable man who served as a rock and pillar within his family; Harold held no greater love than that of his love for his family. He will be dearly missed as a husband, father, grandfather, brother and friend to many.

Funeral arrangements are entrusted to Dutcher Funeral Home in Bronson.