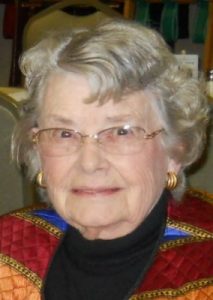 Jean Isabel (Morrisson) Hart, age 96, of Sturgis, passed away peacefully at her home on Tuesday, January 4th, 2022.
Jean was born March 18, 1925 in LaGrange, and was the firstborn daughter to the late Jesse and Ruby (Woodworth) Morrisson.
Jean spent most of her life in the LaGrange and Sturgis area, graduating from Sturgis High School in 1943. She married Fay W. Hart Jr, on January 27, 1946 in Sturgis, following Fay’s discharge from the US Army. They were married for 74 years prior to Fay’s passing in 2020.
Following high school graduation and her marriage to Fay, Jean was both a homemaker and worked as a secretary for a number of local Sturgis businesses. She was employed by the local Sturgis radio station WSTR in the 1950’s. She also was part of the Sturgis School Systems secretarial pool in the 1960’s and 70’s, working in the superintendent’s office for many years.
Jean was a member of the First United Methodist Church of Sturgis and was active in a number of Shirley Temple and other collectible doll clubs through the years. At one time Jean had an impressive collection of Shirley Temple dolls and other memorabilia that brought her much joy of her childhood movie idol. Jean was also very artistic with much time drawing during her lifetime. She also came from a family background that enjoyed music and spent time singing with a local “Sweet Adelines” group. She later became involved in her retirement with a spinoff of her doll collecting by creating miniature room dioramas from scratch, assembling and painting the necessary furniture and décor for each room theme.
She also enjoyed spending summers at the family cottage on Klinger Lake that she and Fay built in their early years of marriage. Following retirement, Fay and Jean became “snow birds”, spending the winter seasons in the Cape Coral Florida area from 1985 until 2000.
She is survived by her son John (Julia) Hart of Kalamazoo; 3 grandchildren: Marlo (Tom) Byrne of Saugatuck, Dayna (Ben) Helmes of Colorado Springs, CO, and Kelly Hart of Ypsilanti; 3 great-grand children: Cassidy Hutton of Chicago, Ben Hutton of Ft.Wayne, and newborn Alexandra Fay Helmes of Colorado Springs CO; sister Judy Mundt of Ft.Wayne, and many nieces and nephews.
She was preceded in death by her parents; husband Fay; daughter Susan Jean Hart (Riede); siblings Hubert Morrisson; Norma Rice and Raymond Morrisson.
In accordance with family wishes, cremation has taken place, and a celebration of Jean’s life will be held at a later date to be announced. The Hackman Family Funeral Homes, 114 S. Nottawa St., Sturgis is entrusted with the arrangements.
The family suggests that in lieu of flowers, those wishing to make a memorial donation in Jean’s memory please consider The First United Methodist Church, 200 Pleasant Ave, Sturgis MI 49091 or Michigan Humane, 30300 Telegraph Road, Suite 220, Bingham Farms, MI 48025-4507.
We encourage relatives and friends to share memories and condolences at www.hackmanfamilyfuneralhomes.com.