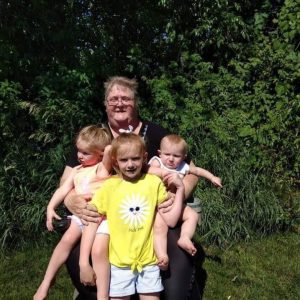 Karen Ann Tyler, age 57, of Three Rivers, passed away at her home on Saturday, January 22, 2022. She was born on June 11, 1964 the daughter of Stanley and Janet (Peters) McClain. Karen attended and graduated from Mendon High School in 1982. She was a lifetime resident of the St. Joseph County area. In her free time, Karen enjoyed playing solitaire, crossword puzzles, and spending time with her grandchildren. She looked forward to watching her favorite TV programs “Big Brother” and “Fixer-Upper”. Karen often shopped at Goodwill and enjoyed sewing and doing arts and crafts.

Karen is survived by her daughter, Courtney Hammond and her fiancé Leroy Bowman. Six grandchildren; Kloe Hammond, Nova Bowman, Braelyn Bowman, Destiny McClain, Thomas McClain, and Mackenzie Donley. Two brothers; Raymond McClain and Russel McClain. And nieces and nephews. She was preceded in death by her parents, Stanley and Janet.

In keeping with family wishes, cremation has taken place. A private family memorial service will be held on a later date. It is suggested that memorials be made to the family. Memories and condolences may be expressed to the family at eickhofffuneralhome.com