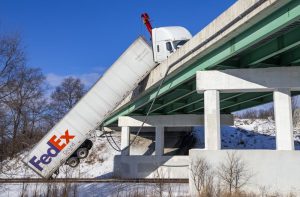 A semitrailer was left dangling from an Indiana Toll Road overpass for hours Wednesday after it slid off the tollway amid icy, frigid conditions that caused other accidents, state police said.

A car traveling in front of the FedEx semitrailer lost its traction and skidded about 9 a.m. Wednesday, prompting the truck’s driver to swerve near Mishawaka, just east of South Bend.

The truck slipped over the tollway’s edge, leaving it hanging from an overpass and nearly falling onto a road below, said Indiana State Police spokesman Sgt. Ted Bohner.

“The truck was going eastbound and slid on the slick bridge deck and went over the edge,” Bohner told the South Bend Tribune.

Crews were working at the site to repair fiber-optic cables, Bohner said.

He said near zero- degree temperatures and icy bridge decks caused multiple accidents in the same area Wednesday morning, including a van that slid off the tollway and into bushes below.  (AP)