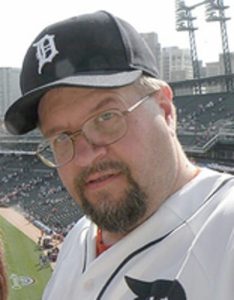 Thomas Gregory Mielcarek, age 57, of Sturgis, passed away Sunday, Jan. 23, 2022 at Goshen Hospital in Goshen, Indiana.
He was born Sept. 16, 1964 in Detroit, the son to the late Thomas and Garnette (Perzanowski) Mielcarek.
Tom spent his early years in Stevensville, graduating from Lakeshore High School with the class of 1982 and some time at Lake Michigan College (LMC).
Shortly out of high school he started his employment with Hannapel Home Center in St. Joseph, Michigan. He began as a driver and began to work his way up the ladder. In the late 1980’s he moved to Sturgis and became the assistant manager of Hannapel Home Center in Sturgis and then became the manager of the store. He also worked for the Sturgis Journal beginning in 1996 as a sports writer, covering many of the area high school sports. It was at the Journal where he met the love of his life and on Sept. 12, 1998 he married Sandra Arnold in Three Rivers.
Tom had a love for many things including the Chicago Blackhawks, Chicago Bulls, Chicago Bears, and the Detroit Tigers. He was a fan of University of Michigan Sports and loved all high school sporting events. Tom made it a point to ensure that every high school player received recognition in his reporting throughout the season. He also loved to spend time in the car driving the back country roads in Michigan and keeping a map with all the highlighted back country roads he had driven on in the state.
Surviving are his wife: Sandra (Arnold) Mielcarek of Sturgis; stepson: Dustin (Erin) Fenech of Sturgis; 2 step-grandchildren: Lane McGillis and Bradey Fenech; 1 brother: Scott Mielcarek of Stevensville; 1 sister: Stacey (Jeff) Sever of Anchorage, Alaska; his Aunt: Celestine Staniszewski; Aunt and Uncle: Cheryl and Mark Fox. Nephews: Michael Sever and Eric Sever and several step-nieces and nephews and many cousins including his cousin who is not his cousin: Cynthia (Rain) Roskowic of Madison, WI.
He was preceded in death by his parents, his uncle, Paul Staniszewski, and grandparents.
According to his wishes, cremation has taken place. A Memorial Service celebrating the life of Thomas Gregory Mielcarek will be held at a later date to be announced. Memorial donations in his memory may be directed to the Corky Emrick and Tom Mielcarek Memorial Scholarship Fund or to the family. Envelopes are available at the Hackman Family Funeral Homes of Sturgis who have been entrusted with the arrangements.