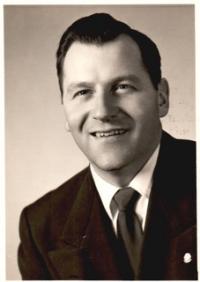 Frederick Alan Snell was born March 18, 1927, in Evanston Illinois, the third child to the late Fred and Edith (Walker) Snell, and he passed away February 14, 2022 in Lawton, Michigan at the age of 94.

Fred graduated from Three Rivers High School in 1945 and went on to serve in the Merchant Marine Corp where he was a Cadet-Midshipman and played football. In 1950, Fred attended Bowling Green State University where he played football and earned his Bachelor of Science Degree. In 2019, they honored him as the oldest living football alum.  In 1950, Fred was drafted into the Army during the Korean War and was discharged in 1952 as a Master Sergeant. Following his service, Fred advanced his education at Michigan State University where he graduated in 1957 with his Masters of Administration Degree.

Fred became Director at Camp Wakeshma in Three Rivers in the 1950’s, running the camp until 1976. There he met his wife, Ginny, hiring her as cook and enjoying her brownies. On March 30, 1958 In Coldwater, Fred married Virginia Louise (Renshaw) Snell. The couple enjoyed 61 years of marriage prior to her passing in 2019.

Fred enjoyed a long and fulfilling career in the education field that led him from teaching and coaching football to principal and administration. He taught in Vicksburg, Albion and Paw Paw. He was the Principal at White Pigeon High School for six years. Following that, he was high school assistant principal in Dowagiac for two years. He was a member of the Paw Paw United Methodist Church, the Michigan Education Association and the American Legion, McGowan – Johnson Post 68, Paw Paw.

Fred was loved and respected by all who knew him and his sarcastic sense of humor will be greatly missed. His devotion to teaching, coaching, and nurturing young people will live on for generations. Fred enjoyed sailing, reading, tinkering with cars and appliances, and spending summers with family at Rest Ye Cottage on Lake Charlevoix.

There will be a gathering with refreshments held Saturday, March 26, 2022 from 11:00 a.m. until 1:00 p.m. at the Adams Funeral Home, 502 West Michigan Ave., Paw Paw. Interment with military honors will immediately follow at Riverside Cemetery in Three Rivers. There will be an informal celebration held June 25, 2022 at 2:00 p.m. at Camp Wakeshma, 59149 Camp Wakeshma Road, Three Rivers. Memorial contributions may be directed to Camp Wakeshma at P.O. Box 6, Three Rivers, MI 49093. The family would like to thank Laurie Cooper with Centrica Care Navigators for her compassionate care in the recent months.