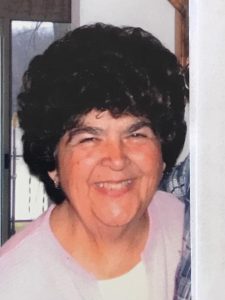 Sandra E. Millard, age 81, of Mendon, died Saturday, Feb. 19, 2022 at her home. She was born in Three Rivers on Aug. 27, 1940 the daughter of Gerald and Virginia (Fish) Adams. She attended Mendon Schools and earned her GED from Three Rivers High School. She was married to Lyle H. Millard on Aug. 3, 1957 in Colon. Sandra worked for her mother and step-father, Archie and Ginny Hawver at Mendon Recreation and Lunch. Later she worked at Gar-V Manufacturing in Three Rivers, the Hansel & Gretel Preschool in Centreville, and volunteered at Heartland Healthcare in Three Rivers. Sandra took a college course in photography, which she enjoyed immensely. She enjoyed time with her grandchildren, gardening, and recreational shopping.

The family will receive friends from 3 to 6 pm Thursday at the Eickhoff Funeral Home in Mendon. Funeral services will be 1 pm Friday, Feb. 25, 2022 at the Mendon United Methodist Church with Pastor Carl Litchfield officiating. Burial will be in Mendon Cemetery. It is suggested that memorial donations be directed to Three Rivers Health Hospice. Memories and condolences may be shared at www.eickhofffuneralhome.com