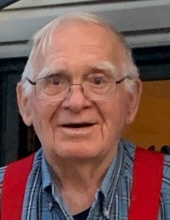 Thomas Isaac Warble, age 91, of Howe, Indiana passed away Sunday morning, February 13, 2022 at his home surrounded by his family.
He was born April 29, 1930 in Brighton, Indiana son of the late John and Pearl (Schwartz) Warble.
Tom resided in Howe for the past 63 years coming from South Milford, Indiana.
On June 20, 1954 he married Willadean Wright in South Milford.
He retired from the Kirsch Company in Sturgis following 36 years of dedicated employment. Tom nearly always worked two jobs and while working at the Kirsch Co. had been employed many years at Warner Hardware in Howe. When he was younger he worked at Baker’s Orchard in Kendallville, Indiana and Cary Glad Farms in Bronson, Michigan.
He was a longtime member of the Pretty Prairie United Methodist Church in Howe. He was also a member of the LaGrange American Legion Post #215.
Tom was a veteran of the Korean War serving from 1951-1953 stationed in Germany earning the rank of PFC. Tom had served as a 4-H leader for over 10 years. Tom was not one to be idle and seemed to be always working around the Halsey farm that he built from a bare piece of ground which was a lifelong dream of his. He loved most all animals and if a stray wondered onto the farm it was soon adopted and found its new home. Tom raised miniature horses and Angora Goats and was a beekeeper for many years and had a true gift in the raising of peonies. The family will forever remember the annual summer vacations. Tom was always busy, but never too busy for his family which was his greatest joy in life.
He is survived by his loving and dedicated wife of 67 years: Willadean; three sons: Don (Tina) Warble of Colon, MI, Bill (Mary) Warble of Howe, IN and Tim (Teri) Warble of LaOtto, IN; nine grandchildren; 10 great grandchildren; two great great grandchildren; three sisters: Janice (Bob) Smart of Raleigh, NC, Margie Strawser of Kendallville, and Joyce (Lloyd) Strelow of Hemet, CA and many nieces and nephews.
He was preceded in death by one son: Ronnie Warble; granddaughter: Mandy Warble; three brothers and five sisters.
The family will receive friends from 4:00 to 8:00 P.M. Thursday at the Hackman Chapel of Hackman Family Funeral Homes. 114 S. Nottawa St. in Sturgis. Funeral services celebrating the life of Thomas I. Warble will be held at 11:00 A.M. Friday at the Pretty Prairie United Methodist Church, 4595 E 750 N, Howe, Indiana. Tom’s nephew The Rev. Jim Hart of the Stuart Alliance Church of Stuart, FL and the Rev. Khristian “Ed” McCutchan will officiate. A graveside committal will follow the service at the Pretty Prairie Cemetery.
The family suggests those wishing to make a memorial donation in Mr. Warble’s memory consider the Goshen Center for Cancer Care, 200 High Park Ave, Goshen, IN 46526 or The Pretty Prairie Methodist Church, 511 3rd St, Howe, IN 46746.
Relatives and friends are encouraged to share memories and condolences at www.hackmanfamilyfuneralhomes.com.