A quest to make “Fisher Lake” the official name of the 327-acre body of water was stalled by the U.S. agency in charge of such matters.

The formality was sought by lake residents Marian Cottingham-Schliesman and Katie Sweeney, who approached St. Joseph County Board of Commissioners in February seeking its support for the official declaration.

Though the county never took a stance on the issue, the matter was resolved in mid-March by the United States Board on Geographic Names. It concluded “Fishers Lake” will remain the official, federally-recognized name, as it has for more than the past 100 years.

There is a caveat, however. BGN officials relented to include “Fisher Lake” as an accepted variant. That may be a small victory for Cottingham-Schliesman, Sweeney and those who support “Fisher.” But it also keeps intact “Fishers Lake” as the name backed by dozens of its residents.

After reviewing information provided by Cottingham-Schliesman and Sweeney, the BGN chose to not pursue the matter due to the number of objections from proponents of “Fishers,” though its compromise was to allow “Fisher” as an acknowledged variant. 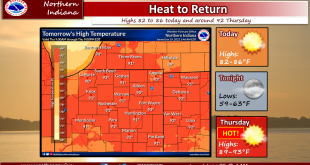 The warming trend will continue today with highs in the lower to mid 80s. Temperatures …