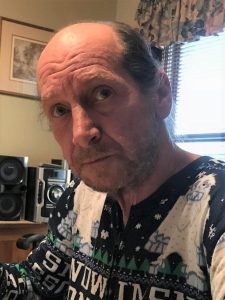 He was born August 27, 1960 in Three Rivers, the son of Ronald and Gwendolyn (Marvin) Kline, and graduated from Three Rivers High School.

Jeffery worked at several trailer factories and was a grounds keeper at Sauganash Golf Course. He enjoyed fishing, tinkering with motorcycles, woodworking, and was an all-around handyman.

Remaining to cherish his memory are his parents; his sister, Amy (Jerome “Buzz”) Bonine; and nephew, Branden Bonine.

Visitation will be held Friday, April 1, 2022 at 11:00 a.m. at Light & Life Wesleyan Church, 15765 Hoffman Rd., Three Rivers. A funeral service will follow at noon at the church with Pastor Ryan Lutz officiating. He will be laid to rest in Riverside Cemetery.

Donations in Jeffery’s memory may be directed to the Alzheimer’s Association or the American Cancer Society. Envelopes are available at Hohner Funeral Home in care of his arrangements.