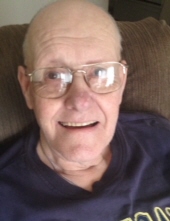 Keith E. Milliman, age 83, of Sturgis, passed away Sunday, March 20, 2022 at Rose Arbor Hospice in Kalamazoo.
He was born April 24, 1938 in Sturgis, son of the late Max M. and Helen C. (Fennell) Milliman.
Keith was a lifelong Sturgis resident and graduate of Sturgis High School with the class of 1956.
Keith had a newspaper delivery route and had been employed by Coachman Industries.
He was proud to have served his country in the U.S. Navy from September 13, 1956 – Sept. 12, 1960 earning the rank of Machinist’s Mate Petty Officer 3rd Class.
He is survived by one daughter: Karla Shafer of Mishawaka; grandchildren: Heather Haviland of Bronson, Adam Boughton of Sturgis and Andrew Boughton of Three Rivers; eight great grandchildren and expecting his 9th in May of 2022; one brother: Roger Milliman of Arizona and nieces and nephews.
He was preceded in death by two daughters: Kristine Dee Milliman and Kathy Milliman and granddaughter: Justin Marie Smith.
In accordance with his wishes cremation has taken place. A memorial graveside service with full military honors will be conferred by Captain John J. Kelley Post #1355 VFW and the U.S. Navy Honor Guard will be held Saturday, April 2nd at 1:00 P.M. at Oak Lawn Cemetery in Sturgis.
The Hackman Family Funeral Homes of Sturgis is entrusted with the arrangements.
We encourage relatives and friends to share memories and condolences at www.hackmanfamilyfuneralhomes.com.