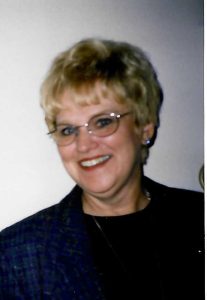 Barbara Lee Wagner of Constantine, went to her heavenly home on Wednesday, April 20, 2022 at the age of 75. She passed away peacefully at her home, surrounded by her family.

Barbara was born on April 27, 1946 in Chicago, a daughter of Edmund “Ed” and Mary “Marie” (Labedz) Jajo. She graduated from Constantine High School in 1964. On October 1, 1966 she married the love of her life, Douglas Wagner.

In her spare time, Barbara enjoyed quilting, bowling, reading, cooking, canning, gardening, square dancing and 4-H. But most of all she loved spending time with her grandchildren. She worked as a telephone operator at General Telephone and as a dispatcher for the LFP Fire Department. She later became a phlebotomist, spending several years working for Three Rivers Health. She was also a medical office receptionist for several years in Three Rivers. Barbara retired early, enjoying many years as a homemaker.

Barbara is survived by her husband of 55 years, Douglas Wagner; a son Michael Wagner; and a daughter Laura (Jeffrey) Hurst. Also surviving are her grandchildren Collin (Brie) Wagner, Luka Wagner, Logan (Gracie) Hurst, and LeeAnn Hurst. She was blessed with one great grandson, Walker Hurst. She is also survived by her sisters Geraldine “Geri” Fish and Sandra (Steve) Horn, many nieces and nephews.

Cremation has taken place according to her wishes. The family will receive visitors on Thursday April 28 from 2 to 4 and 6 to 8 and Friday April 29 from 11 to 12 at the Eley Funeral Home in Constantine. Memorial services will follow at 12-nnon Friday with Pastor Dan Lane officiating. Memorial contributions may be made to Three Rivers Health Homecare and Hospice. Please visit www.eleyfuneralhomes.com to sign Barbara’s guestbook and leave a message for the family.