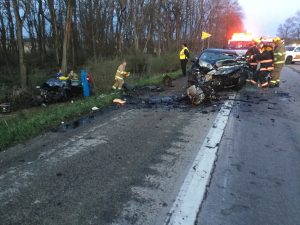 Sheriff Richard Behnke said deputies were called shortly after 6:30 a.m. to an area on M-60, east of Gards Prairie Road.

Hart was airlifted to South Bend Memorial, while Affriseo succumbed to his injuries at the scene.

Authorities said neither Hart nor Affriseo were wearing seatbelts.