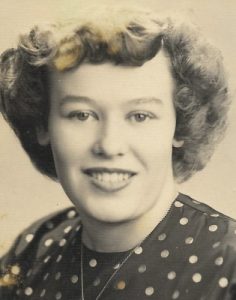 Dorothy May Geyer, age 91, of Sturgis, passed away Wednesday, April 13, 2022 at Fairview Living and Rehabilitation in Centreville.
She was born May 28, 1930 in Charles City, Iowa daughter of the late Orle and Mildred Opal (Chase) Sorensen.
Dorothy resided in Sturgis since 1966 coming from Waterloo, Iowa. Being married to a career Army soldier she and the family had lived several places in the United States and foreign countries.
On May 2, 1950 she married Donald Theodore Geyer, Sr. in New Mexico. He preceded her in death September 11, 2017.
Dorothy had been employed by the Green Briar Motel, the Transogram Company, and the Sturgis Child Care Center all in Sturgis and the Dometic Corporation in LaGrange.
She was proud to have served her country in the U.S. Army. Dorothy enjoyed doll collecting, camping and traveling.
She is survived by one daughter: Nona Lee Patten of Sturgis; three sons: Donald Theodore (Sandy) Geyer, Jr. of Sturgis, Ronald (Susan) Geyer of Howe, Indiana and Jon Geyer of Sturgis; 13 grandchildren; 20 great grandchildren; sister-in-law: Doris Greer of Sierra Vista, Arizona and several nieces and nephews.
She was preceded in death by three brothers: Dean Sorensen, Gordon Sorensen and Chuck Bacon.
In accordance with her wishes cremation has taken place. A gathering of family and friends to celebrate and honor the life of Dorothy May Geyer will take place at American Legion Post #73 in Sturgis at a later date to be announced. Burial of the remains will be at the Fort Custer National Cemetery in Augusta where full military honors will be conferred by the Fort Custer Honor Guard and the U.S. Army Honor Guard also at a later date.
The Hackman Family Funeral Homes of Sturgis is entrusted with the arrangements.
The family suggests those wishing to make a memorial donation in Mrs. Geyer’s memory consider American Legion Post #73, 500 W. Chicago Rd., Sturgis, MI 49091.
We encourage relatives and friends to share memories and condolences at www.hackmanfamilyfuneralhomes.com.