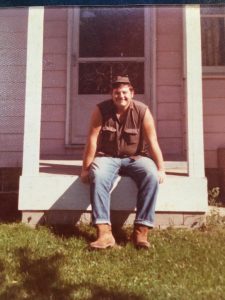 Norman D. Rexford, age 72 years, 8 months, and 28 days, died Sunday, April 3, 2022 at Bronson Methodist Hospital in Kalamazoo. He was born in Three Rivers on July 6, 1949 the son of William Roy Rexford and Beulah Jean (Smalley) Rexford and was a lifetime resident of Mendon. Norm was frequently seen patrolling the streets of Mendon on his bicycle, picking up litter, and supervising any public works project. He also enjoyed attending auctions and garage sales. He’ll be missed by many and will be remembered by his waving to passers-by in the Village of Mendon.

Norm is survived by his brother and sister-in-law, Ernie and Margie Butcher of Mendon, and their son, Dominick; and a sister-in-law, Jeanette Rexford of Denver, IN. He was preceded in death by his mother and father; his step-father, Frank Butcher; two brothers William Rexford, Jr. and Clinton Butcher; and by a sister, Norma Jean Hughes.

Funeral services will be at 1:05 pm on Wednesday, April 6, 2022 at the Eickhoff Funeral Home in Mendon with Rev. Glenn Russell, Pastor of Fellowship Bible Church of Sturgis officiating. Burial will follow in Mendon Cemetery. Memories and condolences may be shared at www.eickhofffuneralhome.com