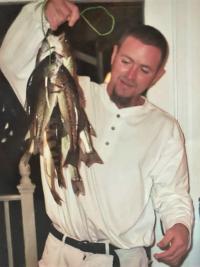 Clayton L. Nelson died at the age of 44 on Sunday, May 15, 2022, in Louisville, KY. Clayton was born June 14, 1977, in Allegan, MI. He was two years old when he and his sister Nichole Nelson Bivins (age four at the time) were adopted by Larry and Nickola Nelson in Edwardsburg.

Clayton was preceded in death by his father, Larry R. Nelson. He is survived by his son, Clayton Lyle Nelson, of Edwardsburg, his mother, Nickola Nelson Nave and step-father, Steven Nave, of Wichita, KS, his sister, Nichole Nelson Bivins, of Three Rivers, and his brother, David (Elizabeth) Nelson, of Las Vegas, NV. Clayton was the beloved uncle of Jessica (Michael) Maurer, Justin Leroy Tighe, Jess Treiber, Jr., James Nelson, and Jonathon, Julie, Jaden, and Josie Hufford, as well as many aunts, uncles, and cousins who remember shared happy times with grandparents, Betty and Lawrence Wolf and Ralph and Jane Nelson, now deceased.

Clayton grew up in Edwardsburg, where he loved his dogs, fishing, drawing, baseball, humor, and acting in community and church plays, including a role as the prodigal son. Clayton continued his art as a hobby and earned his Associate Degree in Computer Aided Design. Clayton also played the role of prodigal son in life. Although his life was far from smooth, he loved and was loved by his family, who now trust that Clayton has turned his face toward Home and has found peace in his Heavenly Father’s arms.