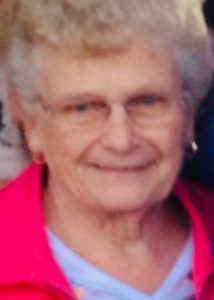 Ilene graduated from Colon High School with the class of 1954.

Ilene was a home maker for 15 years. She then owned and operated a beauty salon for many years. She then worked for Kirsch Co. in Sturgis for 25 years and retired from service in 1998.

The Ross family will receive friends and relatives on Thursday, May 19, 2022 from 2 to 4 and 6 to 8 at the Schipper Funeral Home LTD in Colon. A funeral service will be held on Friday, May 20, 2022 at 11:00 AM also at the funeral home. Interment will follow in Matteson Township Cemetery. The family asks in lieu of flowers memorial donations be directed to the Alzheimer’s Association. Envelopes will be available at the funeral home.

Memories and condolences can be left for the family at Schipperfuneralhome.com.