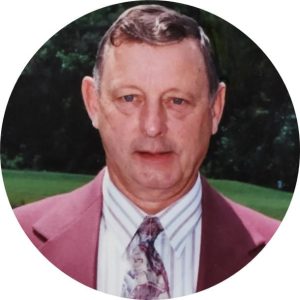 He was born in Marcellus on December 24, 1932, son of Edwin and Cherry. John spent his childhood adoring his three sisters Gloria, Jo, and Sandy. He attended Three Rivers Schools, with his best friend Skip (Herbie) Nisonger, where he played football and ran track.

He graduated from Three Rivers in 1953 and that same year he opened his business, Gearhart Body Shop. He enlisted in the National Guard on April 24, 1950. During his enlistment, he was a qualified Carbine Marksman and Sharpshooter.

While at the Harvey House in Constantine, he met the most beautiful nurse Mary Ann and they fell deeply in love. He married Mary Ann Courtright February 23, 1958. He was honorably discharged from the National Guard April 23, 1959. John and Mary Ann were blessed with three children Mary Kay, Russell, and Karen. John and Mary Ann enjoyed years of traveling, hunting, boating, and camping. When the children became older, they had a boat on Lake Michigan in South Haven where they spent their summer weekends. They later purchased a motorhome and traveled frequently. They enjoyed camping in Mackinaw with family the most. Mary Ann and John had four grandchildren Nathan, Courtney, Russell II, and Breanna. They enjoyed spending time with all the grandchildren especially at their house on the lake.

During the later years of Mary Ann’s life, John took diligent and loving care of her as she battled cancer. Mary Ann and John were married 42 years. He was blessed to fall in love again with his classmate, Sondra Mayer, and they were married April 8, 2002. With their union brought two stepsons Michael (deceased) and Scott Caley. Sondra and John spent their years together putting around the lake on the pontoon and daily breakfasts in various restaurants with all their friends. John and Sondra cherished their blue-eyed great-granddaughters Averi, Gracie, and Izabella. Sondra lovingly took care of John in his advanced years. John throughout his life he enjoyed hunting, fishing, and watching NASCAR racing. But most importantly family and special friends. John enjoyed people greatly and kept many friends close.

In accordance with family wishes, cremation will be conducted. Visitation will be Friday, May 13, 2022 from noon to 1:00 p.m. prior to a memorial service at 1:00 p.m. at Hohner Funeral Home, 1004 Arnold St., Three Rivers. Interment will follow in Riverside Cemetery.

Donations in John’s memory may be directed to St. Joseph County Animal Control. Envelopes are available at the funeral home.