Lansing-area woman dies at 114, third oldest in the US 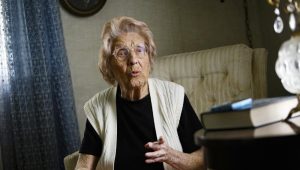 A Michigan woman who was among the oldest living Americans has died at age 114.

Her mind was sharp but “her body just finally gave up,” he said Monday.

Gerontology Research Group had Dunham listed as the 10th oldest living person in the world and the third oldest in the U.S., as of April 24.

“It has been a long life,” Dunham told the State Journal in 2021. “I just get up, move around and I guess that’s about it. I wish I could do more right now but I’m getting pretty old.”

Dunham lived in Lansing before moving in 2020 to an assisted living center in DeWitt Township.

She was born Irene Babcock in 1907. In 1927, a sore throat kept her home from school on the day that explosives destroyed Bath Consolidated School, killing more than 40 people, including 38 students.

There was no graduation event that year. Dunham got her diploma 50 years later in 1977 when she and other graduates from 1927 were invited to the school’s ceremony.