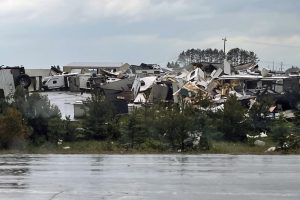 A second person died in a tornado that hit northern Michigan, authorities reported Saturday, as crews searched a mobile home park that was virtually destroyed by the rare weather event.

The person, who was in their 70s, lived in the Nottingham mobile home park, which was among the first sites hit by the tornado Friday, said state police Lt. Derrick Carroll.

“There have been trailers picked up and turned over on top of each other. Just a very large debris field,” said Chris Martin, Otsego County fire chief. “Crews are in there right now doing a secondary search with heavy equipment.”

He said there’s “probably 95% destruction in there.”

The tornado struck Gaylord, a city of about 4,200 people.

More than 40 people were injured.

“We were searching in places where we knew the occupants. We were calling them out by name,” Claeys said. “It’s a lot more personal when our officers know the people who live in those homes.”

Extreme spring winds are uncommon in the area because the Great Lakes suck energy out of storms, especially early in the season when the lakes are very cold, said Jim Keysor, a Gaylord-based meteorologist with the National Weather Service.

“Many kids and young adults would have never experienced any direct severe weather if they had lived in Gaylord their entire lives,” he said.  (AP)