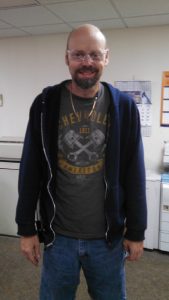 Scott Douglas Monroe, age 54, of Constantine, died Tuesday, May 3, 2022 at his home. He was born in Three Rivers on Dec. 22, 1967 the son of Dwight James Monroe and Delores Mae (Stutsman) Monroe and was a lifetime resident of St. Joseph County. Scott graduated from Mendon High School with the class of 1987, and was employed at Lear Plastics (LSI), later known as International Auto Components (IAC) in Mendon. He enjoyed working on cars, attending the races at Martin Dragway, and spending time with his nieces and nephews.

Scott is survived by two brothers, Bruce Monroe of Niles and Randy (Tracy) Monroe of White Pigeon. He was preceded in death by his parents; sister, Vicki Monroe; brother, Lance Monroe; and sister-in-law, Brenda Monroe.

In keeping with his wishes, cremation has been conducted, and no services are planned at this time. Memories and condolences may be shared with the family at www.eickhofffuneralhome.com