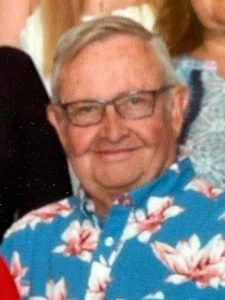 Tom discovered his love of cars as a young boy at his father’s dealership, Albion Motor Sales Inc. He later worked in sales for Boshear Ford in Marshall, Royer Ford in Constantine, Engle Ford in Sturgis, and Dave Smith Pontiac Buick GMC in Sturgis. He finally retired in 2020 after delivering cars for the Schoolcraft and Mishawaka Auto Auctions.

Tom could often be seen driving his 1976 Cadillac ElDorado convertible in local parades. He had a great sense of humor and loved telling jokes. Mostly Tom loved being with his family, especially his grandchildren.

He was preceded in death by his parents, sister Ann Tymkew and brother David Richards.

A memorial service will be at a later date. Memorials may be directed to the Richards Family Nursing Scholarship at Glen Oaks Community College, 62249 Shimmel Road, Centreville, MI 49032.Please sign Tom’s guest book and leave a memory for the family at www.eleyfuneralhomes.com.