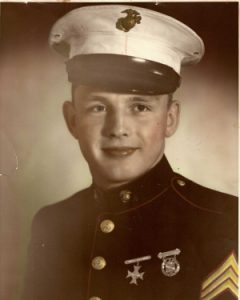 Robert E. Brewer, age 86, of Constantine, passed away on Wednesday, June 1, 2022 at Three Rivers Health. He was born on July 4, 1935 in Constantine, a son of Elwood and Fern (Chappalear) Brewer. Robert graduated from Constantine High School in 1953. Following graduation, Robert served in the US Marine Corps until 1956. On February 4, 1966 he married Myrtle Haines in Constantine.

Robert worked as a truck driver for Coca-Cola Company and later worked for Continental Can. In 1965, he began working for the Constantine Police Department, eventually becoming Police Chief in 1970, finally retiring after 32 years of service. After retirement, he served as trustee on the Constantine Village Council from 2002-2014. Robert enjoyed woodworking, fishing, painting, and writing family stories. He especially loved his family and going to family reunions.

Robert was preceded in death by his parents and sisters Linda Rentfrow and Joyce Matson.

Relatives and friends will be received at Eley Funeral Home in Constantine on Thursday, June 9, 2022 at 10:00 am, where services will follow at 11:00 AM. Interment with Military Honors will follow in Constantine Township Cemetery. Memorials can be given to the Veterans Support Fund of SWMI. Please visit Robert’s page to sign his guest book and leave a message for the family at www.eleyfuneralhomes.com.