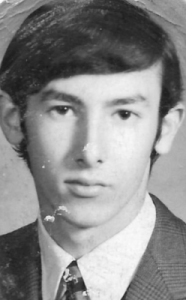 Richard resided in Sturgis since 1954 and was a graduate of Sturgis High School with the class of 1970.

He had been employed by the Kirsch Company in Sturgis and was a member of the Holy Angels Catholic Church also in Sturgis.

He had a love for animals and truly found joy helping others.

Richard is survived by his brother: Thomas (Holly Webb) Walker of Sturgis; sister-in-law: Bonnie Walker and Kim Walker, both of Sturgis, and several cousins.

He was preceded in death by his parents and brothers: Michael Walker, George Walker, and Joseph Walker.

In accordance with his wishes cremation has taken place. A memorial graveside service and burial will take place at Oak Lawn Cemetery in Sturgis at a later date to be announced.

The family suggests those wishing to make a memorial donation in Mr. Walker’s memory consider the charity of one’s own choice.