KALAMAZOO –The good news for Kalamazoo Wings fans is that they will still have a few more opportunities to see defenseman Taylor Ellington play this season. The bad news is that he will more than likely be wearing a Chicago Express uniform.

Ellington, who has played 55 games with the K-Wings this season, was traded to the NHL Columbus Blue Jackets by the Vancouver Canucks yesterday.

On the season for far, Ellington scored seven goals and 15 assists. While the K-Wings left Monday morning for a three-game stretch against the Everblades this Wednesday, Friday and Saturday, Ellington did not make the trip. On Saturday, Ellington, and forward Darren Archibald were assigned to the AHL’s Chicago Wolves.

Following the trade, the Blue Jackets assigned Ellington to the ECHL’s Chicago Express. The K-Wings and Express will face each other in five more games, including back to back games in Kalamazoo next weekend. 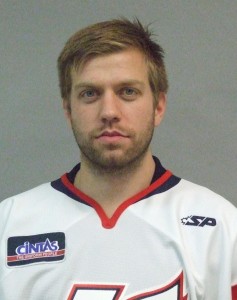