Patient Sirota lighting up the ice for K-Wings

Nick Sirota waited patiently for his time to shine as a member of the Kalamazoo Wings, and that persistence paid off in a big way for the 28-year old native of Fox Lake, Wisc.

During the regular season, Sirota scored 22 goals and 23 assists and was a plus-13. But it was the last month of the season when Sirota really started catching fire.

In just 15 games, Sirota knocked in 10 goals and racked up seven assists, which earned him the ECHL Player of the Month Award for March. In addition, during that stretch, Sirota went on a nine-game goal scoring streak, which tied for the sixth-longest goal streak in the ECHL’s 24-year history.

Sirota attributes his success to his linemates.

“I think as a line, me, (Kory) Karlander and Archie (Darren Archibald), we just played well together,” he said. “Archie’s a big guy and creates space and Karly does well moving the puck through the neutral zone, so I was the one scoring goals there for a while.”

But, as Sirota points out, it isn’t always about chemistry.

“It takes a little bit of luck, too. You have to be in the right spot at the right time,” he added.

A graduate of Northern Michigan University where he also played hockey, Sirota spent the past two seasons playing for the Missouri Mavericks of the CHL. During the off-season, a contract dispute resulted in the Mavericks trading his rights to the Arizona Sundogs.

“It was just one of those things where they thought that I probably asked for more money than they wanted to give me,” Sirota said.

After the K-Wings expressed interest in him and because of the fact that he wanted to play in the ECHL after spending the past few seasons in the CHL, Sirota ended up signing with Kalamazoo. But it wasn’t as simple as that.

“I was kind of waiting to see if Kalamazoo was going to have enough room to fit me on their roster,” he said. “I made it through training camp and after a couple guys got called up to the AHL, I got regular playing time. And it’s been a blast.”

“When you get more playing time, you get more chances out there,” Sirota said. “You’re on the power play, the penalty kill, so your chances almost double. And obviously, if you don’t work hard, nothing is going to happen.”

Another bonus of signing with the K-Wings — it was close to home.

“Most of my family lives in Chicago and being from Wisconsin, my parents only have to go about four-and-a-half hours to be able to come see me,” he said. “The last two years, being eight hours away from home and traveling all the time, you don’t get to see them a lot.”

As much as Sirota enjoys having his family around to watch him play, they enjoy being there just as much.

“It makes them feel proud that I am out there,” he said. “They always tell me how much excitement it brings them. They follow our games pretty closely. It’s nice to have that supporting cast. Not everybody has that.”

Carrying his scoring prowess into the playoffs, Sirota, along with Maxime Lacroix of South Carolina, are currently tied for second overall in the league with nine points (five goals, four assists) each.

The Stingrays and K-Wings are currently battling each other in the Eastern Conference Semi-Finals. One of the keys for this series, or any, is special teams, according to Sirota.

“Even if you don’t score on the power play, you always want it to be positive,” he said. “You’re always moving forward and gaining momentum, and special teams do that for you. If you kill off a big penalty, that will build momentum for your team.”

The K-Wings did just that in Game 2 on Saturday night when, on a five-on-three penalty kill, the K-Wings allowed only one shot by the Stingrays.

The K-Wings and the Stingrays will face off on Friday night in the game four of the series at the North Charleston Coliseum, where the K-Wings swept both games during the regular season. Sirota said that while the playoffs are a whole different experience, he is confident in the K-Wings abilities on the road.  With a win, the K-Wings can advance to the Eastern Conference Finals for the second year in a row.

“I don’t know if its pressure, but we play well on the road,” he said. “You know you’re going to get the best effort no matter what.”

The K-Wings hold a 3-0 lead in the best-of-seven series. 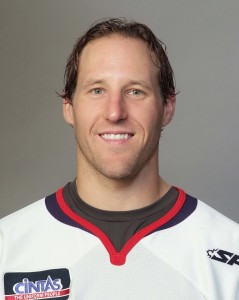