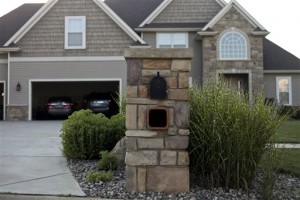 More than two dozen homeowners in a southwest Michigan community are frustrated after county officials told them to remove their stone mailboxes.

On July 14, letters from the Road Commission of Kalamazoo County were sent to 25 homeowners in a Texas Township subdivision, saying they must replace the stone and brick mailboxes by Aug. 14. The letters say the mailboxes “pose a hazard to the motoring public” and the homeowners have to install in their place others that conform to the commission’s policy, which places a limit on dimensions and calls for collapsible supports, among other things.

“This is crazy,” said resident Andrea Hart, who added that the Crooked Lake Cove subdivision was started in 2008, and the mailboxes only recently became an issue there.

A majority of the mailboxes in the subdivision are made of stone and brick, but Hart noted that two other phases of Crooked Lake Cove that are currently being built have conforming mailboxes, the Kalamazoo Gazette reported.

“They’re saying it’s a concern or safety for using these roads,” Hart said. “We live in a subdivision. People shouldn’t be going that fast.”

Hart said she and her neighbors would be more understanding if they lived on a major road, but they believe a subdivision is different.

“In subdivisions people shouldn’t be going that fast anyways,” Hart said. “Are they going to remove trees, telephone poles and everything that obstructs the side of the road? It’s kind of silly all around.”

Hart said she and a handful of neighbors don’t plan on immediately replacing their mailboxes.

“I think the majority of people will wait and see what happens,” Hart said.  (AP)