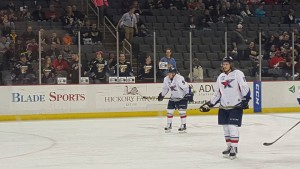 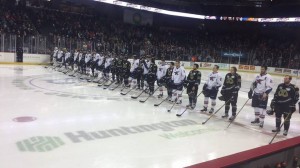 TOLEDO, OH – After back-to-back wins against the Colorado Eagles (25-23-2-0) at Wings Event Center on Friday and Saturday, the Toledo Walleye (32-14-2-3) shut out the Kalamazoo Wings (22-24-4-1) by a score of 2-0 on Sunday at the Huntington Center.
The Battle of the Bootlands highlighted the weekend on the ice at Wings Event Center as Nick Bootland and his K-Wings faced off against the Eagles and his younger brother, Darryl.
The younger Bootland and forward Trent Daavettila both played for the K-Wings and now play for the Eagles.
On Friday night, the two teams exploded for six first period goals. The Eagles kicked off the socring barage as they struck just 1:38 in the the opening period for a 1-0 lead.
Striking back minutes later, Justin Taylor put the K-WIngs on the board with his 15th of the season.
Not skipping a beat, the Eagles scored their second of the night 28 seconds later and followed that up with at shorthanded tally just under a minute later for a 3-1 advantage.
Just over two minutes later, Ludwin Blomstrand cut the Eagles lead in half with an unassisted goal, his 18th of the season. Anton Cederholm scored later in the period to knot the game at 3-3 after the first 20 minutes.
The Eagles took the lead just 29 seconds into the second period, but it was all K-Wings from there.
Tyler Shattock tied the game at four with his ninth goal of the year just over two minutes later. Brett Ponich scored his first of the season later in the period to give the K-Wings a 5-4 lead and Taylor scored his second of the night with just under a minute left in the middle period for a 6-4 K-Wings lead.
Colorado added a goal in third period, but were unable to score the equalizer, giving the K-Wings a 6-5 victory.
Picking up where they left off the night before, the K-Wings hit the scoreboard first on Saturday as Dane Fox scored his 21st of the season on the power play early in first period. The Eagles would tie the score later in the period with a power play goal of their own.
The K-Wings came out flying in the second period as they scored three goals in the first six minutes of the stanza. Cederholm scored his second goal in as many nights just 18 seconds into the period. Colin Murray and Curtis Valk also scored to give the K-Wings a 4-1 bump. The goal by Valk was scored on the man advantage.
Scoring a power play goal late in the period, the Eagles cut into the K-Wings lead.
Alex Mallet and Blomstrand scored in the third period to help cement the K-Wings victory. The Eagles also scored in the third period for a final score of 6-3.
The K-Wings are off to Orlando, Florida for three games against the Solar Bears this Friday, Saturday and Monday. They return home on March 5th when they take on the Utah Grizzlies.
Notes: The Toledo Walleye held a jersey raffle follwing their game against the K-Wings on Sunday with the proceeds going towards the victims and their families of the deadly shooting rampage on Saturday. A message on the K-Wings Facebook page read: “We have learned from the Toledo Walleye organization that they have raised nearly $5,000 dollars as part of their jersey raffle that will be donated to the families of the victims. Please join us in extending our sincerest thanks to this world-class organization.”
Kalamazoo had a season-long three-game winning streak snapped. Ludwig Blomstrand’s five-game goal streak came to an end. Clay Witt made 29 saves in the loss.