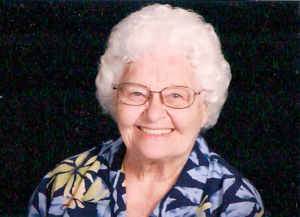 Doris Ellen Brady, age 91, of Three Rivers, passed away peacefully early morning Saturday, June 04, 2016 with her family at her side. She was born August 15, 1924 in St. Louis, MO., the daughter of the late Charles and Margaret (Herwig) Tabor.

Mrs. Brady has been a resident of Three Rivers since 1944. She was employed for over twenty years as an operator and supervisor for General Telephone Company before retiring in 1989. She and her late husband Paul have been long time and faithful members of the Immaculate Conception Catholic church where Doris was active in Daughters of Mary, the St. Francis Group, and also the choir. She was a member of the American Legion Auxiliary and having lost her son Lance Corporal Joseph Brady to the Vietnam War in 1968, she became a Gold Star Mother. In her later years Doris was an avid volunteer for Three Rivers Hospital.

Mrs. Brady was preceded in death by her parents, her beloved husband Paul in 1983, one infant son Phillip Brady, son Joseph Brady, and her sister Shirley Hagen.

A Mass of Christian Burial will be held at 11:00 a.m. on Wednesday, June 8th, 2016 at the Immaculate Conception Catholic Church with Fr. Antony Rajesh as celebrant.

Private interment will be held at Riverside Cemetery following the mass.

Memorials may be donated to the Immaculate Conception Church Building Fund or the Three Rivers Health Hospice and Homecare. Envelopes are available at Hohner Funeral Home in care of arrangements.. Online condolences may be left at www.hohnerfh.com.