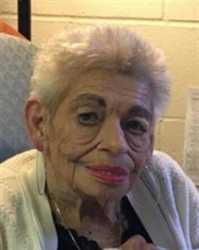 Betty was employed at Harding’s Market, but spent the majority of her career working for Dr. Porter where she helped care for many local residents.

She was a feisty woman and had a knack for making people smile. Friendships came easily. Even in her later years she was surrounded by family and friends of all ages. She cherished spending time with her parents, siblings, and her children, and grandchildren.

She was preceded in death by her husband, Robert when she was only 49. She often reflected on their marriage as “the best”. Their love was deep, powerful, filled with joy, humor, and a common purpose. Together they helped run the Evan’s farm in addition to maintaining their own full time jobs. They were a hard working couple, but knew how to have fun together. They spent many Saturday nights dancing at the Three Rivers Elks Lodge and were avid Detroit Tiger fans.

Betty is survived by her sister, Ann Lovett of Three Rivers, daughter Dawn (Leon) Silicki of Delaware and South Carolina; sons, Harry Rocco of Florida and Michael (Linda) Evans of White Pigeon; six grandchildren including Erica and Christopher whom were amazing caregivers as her health failed; several great grandchildren and many nieces and nephews.

In accordance with family wishes cremation was conducted and a graveside service will be held at 11:00 a.m. on Friday, October 21, 2016 at Riverside Cemetery.

Donations in Betty’s husbands memory may be directed to American Cancer Society . Envelopes available at Hohner Funeral Home in care of arrangements. Online condolences may be left at www.hohnerfh.com.