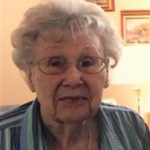 Joyce Longenecker, age 93, of Three Rivers passed away on Sunday, November 6, 2016 at Grace Healthcare of Three Rivers. She was born in Three Rivers on November 17, 1922 the daughter of the late Clarence “Dutch” and Rena Belle (Moyer) Bitner.

Joyce graduated from Three Rivers High School in 1941. On June 21, 1942 she was united in marriage to Roscoe “Ross” Longenecker. Together they owned and operated Longenecker Distributing for over thirty-six years. They enjoyed spending their winters in Marco Island, FL and cherished sixty-eight years of marriage together until his passing in 2010.

Private family services will be held at Riverside Cemetery.

Memorial donations may be directed to American Cancer Society or National Osteoporosis Foundation. Envelopes available at Hohner Funeral Home in care of arrangements. Online condolences may be left for the family at www.hohnerfh.com.