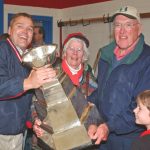 Martha Parfet, along with her husband Ted, were a driving force in the Kalamazoo community for many years.  Parfet, 91, passed away at  her home on Gull Lake Monday morning.

She was the last surviving of W.E. Upjohn’s 11 grandchildren.

In 1945, Martha and Ted were married. They had four children, William, Donald, Sally and Jane, 10 grandchildren and 18 great grandchildren. Ted passed away in 2006 at the age of 84.

In 1974, the Parfets’ brought a professional hockey team to town, the Kalamazoo Wings. Under the Parfets’ ownership, the franchise won three championships, two in the International Hockey League and one in the United Hockey League.

The Parfets sold the K-Wings and the Wings Stadium Complex, now known as Wings Event Center, to William D. Johnston and Greenleaf Hospitality Group, with the new ownership taking full control of the team and complex in 2008.

“She had a kind heart and a generous spirit,” her son Donald Parfet said in a statement published in the Kalamazoo Gazette. “She was very active in our community and she just always was imagining ways that she could help make our community better. She had a great fondness for nature, all things in the natural world, and was very passionate about environmental issues.”

Johnston and his wife, Rhonda Stryker, released the following statement on the passing of Parfet.
“During her lifetime, Martha served in leadership roles of nearly every Kalamazoo cultural institution, advocated on their behalf and challenged them to do more. In 1974, Ted and Martha Parfet brought professional hockey to Kalamazoo by building the now Wings Event Center and establishing the K-Wings Hockey Club. For three decades, Martha was a fierce and loyal owner. But most of all, she was a great fan of K-Wings hockey.
“Many people recall with fondness the many joyful stories that Martha would share with great laughter about the road trips that she and Ted would take on the team bus to away games. Many others have shared their memories of the kind and gentle soul, who always had time for them when they stopped and talked with her at her seat in section eight at Wings Stadium.
“Like many other institutions in Kalamazoo, the Kalamazoo Wings hockey organization lost a valued and dear friend when Martha passed away. She will be missed.”