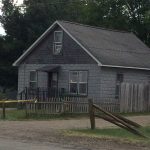 An unidentified 34-year-old man was seriously injured early Monday when he was stabbed in the neck at a home on Constantine Street, just south of Broadway, on the south side of Three Rivers. St. Joseph County Prosecutor John McDonough said a 28-year-old man and the victim were arguing when the incident occurred. The victim was taken to Three Rivers Health for treatment. McDonough said he is in stable condition. Three Rivers Police are handling the investigation, with the assistance of the St. Joseph County Major Crimes Task Force.