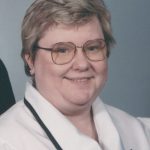 Sue was preceded in death by her mother in 2017 and her father in 1982. She leaves to cherish her memory, husband of forty-nine years Larry Rigdon of Three Rivers and sister, Alona (Edwin) Bachman of Niles.

Cremation will be conducted and a memorial service will be held at 1:00 p.m. on Thursday, October 5, 2017 at the First United Methodist Church, 215 N. Main St, Three Rivers, MI 4909 with Pastor Derl Keefer officiating. Visitation will also be held one hour prior to services.

Memorial donations in memory of Sue may be directed to St. Joseph County Animal Rescue Fund. Envelopes available at Hohner Funeral Home in care of arrangements. Online condolences may be left at www.hohnerfh.com.