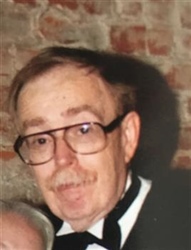 Kenneth Charles Westfall, age 73, of Three Rivers, passed away on Friday, March 23, 2018.  He was born on May 27, 1944 in Dowagiac, the son of the late Clarence Wellington and Vivian June (Rudd) Westfall.

Ken proudly served his country in the U.S. Air Force where he served in Guam.  He was honorably discharged on June 21, 1968. On June 15, 1968 Kenneth was united in marriage to Mrs. Glenna Marie (Chappell) Westfall who survives.  Ken was preceded in death by his parents, father and mother in law, Jack (Connie) Chappell, and one brother, Mike Westfall.

In accordance with family wishes cremation will be conducted and memorial services will be held at 11:00 a.m. on Wednesday, March 28, 2018 at the Hohner Funeral Home with Rev. Derl Keefer of the First United Methodist Church officiating.  Military honors will follow under the auspices of the American Legion Hice-Shutes Post #170.

Memorials may be donated to the charity of one’s choice.  Envelopes available at the funeral home.