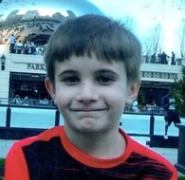 Tegan Richard VanScoik, 11, of Three Rivers, passed away Thursday, March 22, 2018 at Bronson Hospital. He was born in Tallahassee, FL on August 23, 2006, a son of Philip VanScoik and Crystal Stewart. Tegan attended Riverside Elementary School in Constantine. He enjoyed cars, especially hot wheels, being outdoors, fishing, biking and sports as well as playing his X-Box.

Relatives and friends will be received Monday from 2 to 4 and 6 to 8 pm at Eley Funeral Home, Constantine. Funeral services will be held at 11 am Tuesday at Porter Baptist Church, Constantine, with Pastor Randy Peterson officiating. In lieu of flowers, the family requests memorial contributions be made to Eley Funeral Home to help the family with expenses. Online messages may be left for the family at www.eleyfuneralhomes.com.

Bruce Leigh Heywood , age 71, of Tampa, Florida had his heavenly homecoming on July …