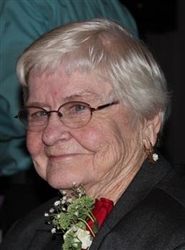 Mary C. (Katie) Miller of Three Rivers passed away on Saturday, April 14, 2018. She was preceded in death by her husband, Clyde Hubert, her daughter, Shirley, her parents and all of her siblings.

Mary was committed to serving her community. She volunteered as both a Cub Scout and Brownie leader. She worked as a census taker and was an election worker in Three Rivers for over thirty years. Mary volunteered as a teacher’s aide, was elected as President of the M.J. Huss PTA and served on the Three Rivers PTA Council.

After raising her children, she returned to the labor force; later becoming President of ACWA Local 972. Mary continued to volunteer and was named St. Joseph County Volunteer of the year for the hours she donated to the Three Rivers Senior Center. Mary was a long-time member of the 9th Street United Methodist Church in Three Rivers where she was also known for her willingness to volunteer, her cakes and her pies. She will be missed by her family and her many friends.  Visitation will be held at Hohner Funeral Home in Three Rivers on Saturday, April 21st, 2018 starting at 10:00 a.m. until time of services beginning at 12:00 noon with Pastor Edward Ross officiating.

Cremation will be conducted following services.

Memorials donations made in Mary’s name can be made out to the Ninth Street Methodist Church’s Missions Fund. Envelopes available at the funeral home.