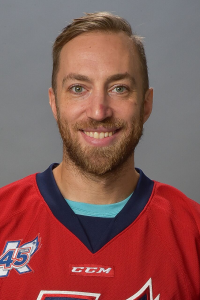 The Kalamazoo Wings (4-6-0-1) dropped a pair of games this past weekend.  On Friday night, the K-Wings fell to the Toledo Walleye by a score of 5-2 and then on Saturday to the Brampton Beast 4-2.

It wasn’t a great weekend as we lost both games,” said K-Wings defenseman Kyle Bushee.  “I think we just need to be better on capitalizing on our chances. We created a ton of chances but failed to score on them.”

The K-Wings put 69 shots on net this past weekend but only managed four goals.  In 11 power play chances, the K-Wings were able to score two goals

During Friday nights contest against the Walleye, the K-Wings trailed by a 3-1 margin after the first period.  The Walleye struck for two goals in the first five and a half minutes of the opening frame. Trevor Hamilton scored just over a minute into the period while Kevin Tansey made it a 2-0 lead minutes later.

The K-Wings were able to cut into the Walleye lead midway into the period on Aleksandr Mikulovich’s first goal of the season.  Mikulovich took a pass from Erik Kattelus and was able to send it past Walleye netminder Kaden Fulcher.

Toledo capped off the period with a goal by Tyler Spezia to make it a 4-1 Walleye advantage.

Opening the second period like he closed the first, Spezia struck again for his second of the night.  Minutes later, Matt Register scored to give the Walleye their biggest lead of the game at 5-1.

The K-Wings managed to add a power play goal by Jagger Dirk  midway into the third period, but the Walleye skated away with the 5-2 victory.

In their contest with the Beast, the K-Wings hit the scoreboard first as Plainwell native Zach Saar scored his first goal as a K-Wing to give them a 1-0 lead in the opening period.   Saar was assisted on his goal by Kyle Thomas and Kyle Bushee.

The second period belonged to Brampton.  Expanding their lead early in the second, David Vallorani gave the Beast their first lead of the game.   Mikulovich scored his second goal in as many nights to bring the K-Wings even with the Beast at 2-2.

But it was all Brampton from there.  The Beast added a pair of goals by David Pacan and Nathan Todd later in the period to make it a 4-2 game.  There was no scoring in the third period.

Keegan Asmundson got the start in goal for the K-Wings stopping 26 of the 30 shots he faced in defeat.

While the K-Wings aren’t firing on all cylinders yet, Bushee feels the team is headed in the right direction.

“I think we consistently work hard,: he said  “I can’t fault our effort in the games we’ve lost but maybe it just comes down to working smarter within our system. When you are losing everything gets magnified and compounded a bit. I just think we need to simplify our game and work smarter and we will get back on track.”

With several new players on the team this year, as well as a new tandem in net, Bushee feels it wouldn’t be fair to place blame on any one player or unit on the ice.

“I think it’s a combination of things,” Bushee said.  “But we are all in this together. Obviously where we are at as a team isn’t good enough and I think we all can take the blame. We all need to be better and find a way to help us win. It’s not a forward problem or a defense problem or a goalie problem. We just need to find a way to step up, be better as a team and execute our game plan and we will win.”

Bushee knows a thing or two about the ECHL.  The defenseman recently played in his 600th career game in the league.  And while 600 games is quite an accomplishment, Bushee isn’t sure when he will be ready for his next adventure.  Right now, he is enjoying the ride.

“Obviously it’s an honor to play the game as long as I have, Bushee added.  “I don’t think it’s really set in yet on how many games that is. I still remember my first like it was yesterday and it’s gone by way too fast. I haven’t really thought much about the future. I am just trying to get ready to beat Toledo on Thursday. But I’d love to play 600 more (games).”

The K-Wings travel to Toledo to take on the Walleye for a 10:35 am game. The team will have a rare Friday off before heading to Cincinnati to take on the Cyclones on Saturday night.

K-Wings goaltender, Jake Hildebrand, was loaned to the Providence Bruins of the AHL.

The K-Wings also acquired forward Colin Jacobs from the Maine Mariners on Sunday via a trade.  Jacobs, 25, is in his sixth season as a professional. Jacobs started the season with the Wichita Thunder. He has also played for the Toledo Walleye, Atlanta Gladiators and the Elmira Jackals.  Jacobs has also seen time in the AHL with the Rochester Americans.