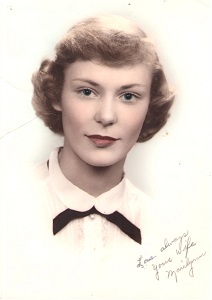 Marilyn Adams, 86 of Three Rivers, passed away in Centreville on June 27, 2019 surrounded by her loving family.Marilyn was born in Chicago on March 6, 1933, a daughter of Otto and Genevieve (Panfil) Stumpf.She attended Three Rivers Schools, graduating in 1952.

On May 2, 1953, she married James L. Adams in Three Rivers; he preceded her in death on September 14, 2009.She previously worked for Denton Mills and at the St. Joseph County Clerk’s office.She enjoyed doing arts and crafts and volunteering at the election booths in town.

She was preceded in death by her parents, husband, and siblings Bob, Ronald, and Audrey.

According to her wishes, cremation has taken place.A private interment of ashes will occur at a later date in Prairie River Cemetery.Memorial contributions can be given to Three Rivers Hospice.Arrangements were entrusted to Eley Funeral Homes, Centreville.