The force looms large for K-Wings in win over Nailers 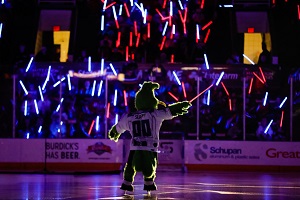 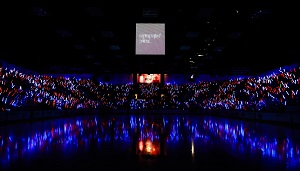 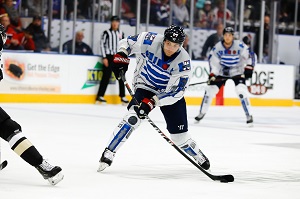 KALAMAZOO, MI – There was excitement in the air this past Saturday night as the Kalamazoo Wings (4-1-1-0)  took on the Wheeling Nailers (4-3-0-0) on Star Wars night. Lightsabers lit up the arena, Jar Jar Binks, Storm Troopers and other characters roamed the concourse and the K-Wings wore R2-D2 themed jersey which were auctioned off following the game.

In addition to cheering for the K-Wings, the fans also took part in a potential history-making event as the K-Wings attempted to set the Guinness Book of World Record for the largest lightsaber battle.

The K-Wings handed out nearly 5,000 lightsabers to fans as they entered the building.   During the first intermission, the clock was set for 3:45 and with judges watching, the fans engaged in the over three minute battle.   Whether or not the K-Wings set the new record or not won’t be known for a few weeks, but judging by the fan engagement, the attempt was a big success.  Although they did not participate, the players could feel the energy from the crowd.

With 5,275 fans in attendance, it marked the second straight game in which the K-Wings had a sellout crowd on hand.  This past Tuesday morning, 5,220 students and teachers packed the house for the annual Education Day Game.

“The atmosphere for both of those games was awesome,” forward Boston Leier said. “The fans were super engaged and it always helps to be able to feed off the crowds energy.”

“The atmosphere was great, the fans were loud,  and as a player, it always gives you more energy for sure,” Veilleux said..

Jumping out to a 3-0 lead within the first 10 minutes of the game, the K-Wings had their sold out crowd in a frenzy early and often.

Luke Sandler started the scoring with his second goal of the season just over four minutes into the period.  Veilleux followed the Sandler goal just minutes later to give the K-Wings a 2-0 lead.

“Boston made a strong play to keep the puck in the zone and made the pass to Justin (Taylor),”Veilleux said.  “I was coming from the bench as the third guy high on the rush and called for it. Justin gave it to me and I cut across the middle and shot five hole.”

After assisting Veilleux on his goal, Leier scored the K-Wings next goal, his second of the season,  with help from Veilleux and Matt VanVoorhis.

“I just made a breakout pass and tried to get up the ice as quickly as possible,” Leier said.  “I was able to sneak behind a couple of their players and got a great pass for VanVoorhis. I knew I didn’t have much time to pick my spot so I just tried to get the puck up off the ice and it ended up in the back of the net.”

Attempting a comeback early in the second period, it took the Nailers just 15 seconds to start cutting into the K-Wings 3-0 lead.

Renars Krastenbergs put the Nailers on the board with his first goal of the season.  Later in the period, the Nailers would cut the K-Wings lead to 3-2 on a goal by Marc-Olivier Duquette.

The K-Wings struck back just 22 seconds after the Duquette goal as Kyle Blaney scored his second of the season by knocking in a Dylan Sadowy rebound.

Later in the period, Zach Diamantoni was in the right place at the right time as he scored his first goal of the year.   Zach Frye sent a shot towards the net to a waiting Diamantoni, who was able to tap the puck into the wide open net, giving the K-Wings a 5-2 lead after two periods.

Padding their lead in the third period, Aaron Thow and Sadowy added a pair of power play goals to give the K-Wings a 7-2 lead and eventual win.

With seven different K-Wings scoring each of the goals Saturday night, the whole team was working hard to put points on the board.

“I think that shows you right there the depth of our hockey team, everybody can score,” Veilleux said.

“It’s always great to get contribution from the whole team,” Leier said. “We have a team full of great players and sometimes the contributions that certain players bring to the game can’t be measured by stats, but they are just as important as the goals and assists. It also helps when the goalies have been playing as great as they have, Kiels (Kielly) and Hildy (Jake Hildebrand) have been awesome.”

Goaltender Jake Kielly stopped a career-high 44 shots in the win. The K-Wings put 29 shots on goal.

The K-Wings, who will wrap up their eight-game home-stand this weekend, have been taking care of business on home ice.  Out of the five games so far, the K-Wings have won four of them while falling to the Toledo Walleye in overtime this past Tuesday.  The K-Wings earned a point in the loss, however.

“I think, especially early in the season, it’s super important to take advantage of the games at home,”Leier said.  “Those are often the games where you look back at the end of the year and wish maybe you could’ve got 1 or 2 more points out of it. I think we’ve done a great job to take those future situations out of play with the way we’ve been competing.”

Not only are the K-Wings winning on home ice, but they are also winning against their division rivals.  Two of those division foes will be visiting Wings Event Center this weekend as the Fort Wayne Komets will be in town both Friday and Saturday nights, while the Cincinnati Cyclones will blow into town on Sunday.  The games on Friday and Saturday begin at 7:00 p.m. while the game on Sunday starts at 3:00 p.m.

Veilleux and Leier understand the importance of these upcoming games, but also know to take things day by day.

“It is big for sure and I think we’ve been taking advantage of it by doing a pretty good job of taking it one day at a time,” Veilleux said.  “These are big points in the standings against division rivals and it could be easy to put that extra pressure on ourselves, but Nick (Bootland) and Joël (Martin) have done a terrific job of keeping everybody focused everyday.”

“ As a team,  we always want to make sure it’s hard for opposing teams to come into our rink,” Leier said, “especially division rivals. We want to make sure that those teams know that it’s going to be a battle every time we step on the ice.”

With just under 40 days until opening night, the Kalamazoo Wings roster continues to take …