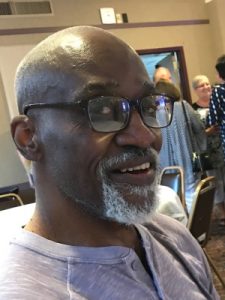 Gregory “Chief” Eugene Edwards, age 65, of Three Rivers, passed away at his home with his family following a lengthy battle with Alzheimer’s and Dementia on Friday, January 3, 2020.  He was born on January 13, 1954 in Flint, MI the son of Robert McGruder and Mareno Edwards.

Greg attended school in his early years in Flint, moving to Sturgis in Junior High and graduating with the class of 1973. He went on to graduate from Central Michigan University in 1978, earning a B.S. in Education. While at CMU, Greg met Debra (Hart). They were married on January 30, 1981.

Greg taught elementary physical education for Three Rivers Community Schools until his retirement in 2011. He loved teaching, but coaching was his passion. He was a proud Wildcat Football coach for over 20 years and coached girls’ track for a number of years. Greg loved his family and adored spending time with his grandchildren. He played on several recreational softball teams throughout the years. Chief was famous for his Karaoke performances throughout the area and his talent at the BBQ grill, a talent he passed on to his sons.

He was preceded in passing by his parents, sister, Terri McGruder and brother, Arthur Terrell.