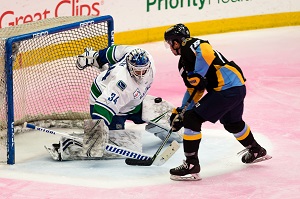 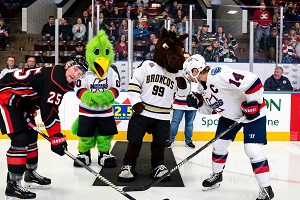 After a thrilling come-from-behind over the Toledo Walleye on Friday night, the Kalamazoo Wings (19-24-6-1) nearly pulled off two more exciting comebacks in their other two games this past weekend.

Unfortunately for the K-Wings, they ended up losing both of those games.

On Friday, the K-Wings jumped out to a 1-0 first period lead on a power play goal bby Eric Kattelus.

The visiting Walleye jumped into the lead in the second period, scoring a pair of goals scored by Gregor MacLeod and T.J. Hensick.

Adding to their lead in the early part of the third period, Hensick scored his second of the night to give the Walleye a 3-1 lead.

Mounting a comeback just minutes later, Josh Teves scored his first goal as a K-Wing to cut the lead to 3-2.

Kattelus knotted the game 3-3 with this second power play goal of the night midway into the period.  With neither team able to net the game winner in regulation, the game moved to overtime. 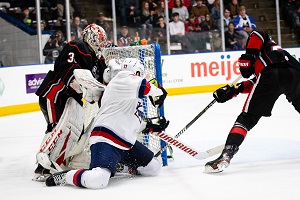 Just 2:23 into overtime, Justin Taylor took a pass down the ice on a break-a-way, pushing the puck between the legs of the Walleye net minder to give the

K-Wings a 4-3 come-from-behind victory in front of the 4,740 fans in attendance at the Annual Pink Ice Game for Valentine’s Day.

On Saturday, the K-Wings came close to pulling off an amazing comeback after trailing the Brampton Beast by a score of 6-2 after two periods. Luke Sandler scored the first two goals for the K-Wings.

A strong third period by the K-Wings produced three unanswered goals, cutting the Brampton lead to 6-5 with just under nine minutes left in regulation. 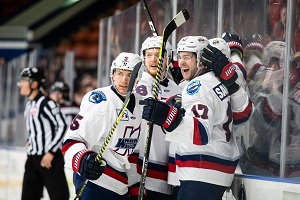 Sandler scored his third of the night, giving him his first career hat trick. Zack Frye and Tanner Sorenson scored the other two goals.

With over two minutes remaining in the game, the K-Wings pulled their goalie for an extra skater, hoping to score the game-tying goal.   The Beast however, scored a pair of empty-net goals to take the 8-5 victory.

On Monday, the two teams met again, this time in Brampton, Ontario.

Looking to avoid a repeat of Saturday night, the K-Wings jumped out to a 2-1 lead after the first period.  Zack Frye and Ian Edmondson scored for the K-Wings.

The Beast added a pair of goals in the second period to take a 3-2 lead heading into the final period. Both of the goals were scored on the power play.

Cory Dunn scored his first professional goal in the opening minutes of the final period to knot the game 3-3.  The Beast regained the lead later in the period on a goal by Nathan Todd.

After the K-Wings failed to score on a 5-on-3 power play, and with a minute left in regulation, they pulled their goalie, Jake Kielly, for an extra attacker.

With just 6.3 seconds left in the game, Justin Kovacs was able to push the puck past the Brampton net-minder to tie the game at 4-4.  However, after a lengthy review by the officials, the goal was waived off, securing the 4-3 win for the Beast.

The K-Wings will travel to Fort Wayne for a game this Wednesday night.  Returning home for a pair of games this weekend, the K-Wings will host the Indy Fuel on Alumni Night.  The first 1,000 fans will receive a Joel Martin bobblehead. Then on Saturday night, take on the Wheeling Nailers on Wizards, Wands and Wings Night.  The first 1,000 fans will receive a K-Wings scarf. Both games begin at 7:00 PM.