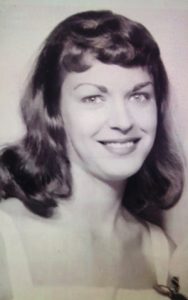 On February 28, 1962 she was united in marriage to Terrance G. Kellogg. They would soon after move to Three Rivers, where they would raise their four sons.

Rosemary was a hard working house mom and wife. She enjoyed gardening, mowing her yard, watching the wildlife and feeding the stray cats that would wander into her yard. She had a special knack for coupon clipping and through the years saved thousands of dollars, of which she was very proud.  Later in life it became difficult for her to bend down to garden. She was thrilled when her neighbor built her a raised garden bed so that she could plant and care for her tomato and pepper plants while standing.

She is preceded in her passing by her husband, her parents, and sons Chris and Robert.

In accordance with Rosemary’s wishes, cremation has taken place and no public services will be held at this time.

Memorials made in Rosemary’s memory may be directed to Boys Town for children, St. Jude’s or to any charity that will benefit animals. Envelopes are available and may be sent to Hohner Funeral Home in care of arrangements.