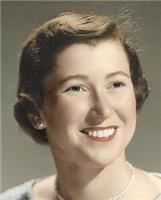 Carolyn A. Gruber, age 88, of Sturgis, passed away Tuesday morning, Dec. 1, 2020, at The Gardens of The Fountains at Bronson Place in Kalamazoo.
She was born in Peoria, Ill., a daughter of the late George and Julia (Roguszka) Dammann.
Mrs. Gruber resided in Sturgis since 2000, coming from Kalamazoo. Her early life was spent in Peoria, where she was a graduate of Academy of Our Lady High School. She furthered her education at Clarke University in Dubuque, Iowa, earning a Bachelor of Science in biology.
On Oct. 24, 1959, she married Donald Charles Gruber, who preceded her in death in February 2017.
Mrs. Gruber retired from Upjohn Corporation in Kalamazoo following more than 20 years of dedicated employment, which began with research in the biology labs and eventually to administering medical trials internationally primarily in Australia, Asia and South America.
She was a member of St. Claire Mission Parish in Centreville.
She was known as “Bugs” when she was a batgirl for the Peoria Red Wings professional women’s baseball team during the 1946 and 1947 seasons. She instilled a love of books in her family and her grandchildren will forever remember how she could play a mean game of Scrabble.
She is survived by two daughters, Christa Gruber of Chicago and Ann (Walter) Gruber de Oliveira of Ann Arbor; a son, Dr. David Gruber of Grand Rapids; three grandchildren, Stefano, Sophie and Sandro de Oliveira; a brother, Gordon (Karen) Dammann of Lena, Ill.; a sister, Elaine (Gary) Clark of Peoria, Ill.; and several nieces and nephews.
The family would like to extend heartfelt thanks and gratitude to the staff of The Gardens for the love and care that was extended to their mother.
In accordance with her wishes, cremation has taken place. Private services and burial of ashes will take place at a later date at Fort Custer National Cemetery in Augusta.
Hackman Family Funeral Homes of Sturgis is entrusted with arrangements.
In lieu of flowers, the family suggests memorial donations remembering Carolyn be directed University of Michigan Alzheimer’s Disease Center, alzheimers.med.umich.edu.
Her obituary is also at www.hackmanfamilyfuneralhomes.com, where relatives and friends may share memories and leave condolences for the family.