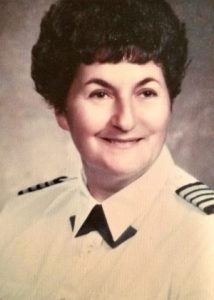 Esther Bennett Wolf, age 86, of Burr Oak, died on Tuesday, December 8, 2020.
Esther was born at the Spring Hill Stock Farm in Burr Oak on August 14, 1934, the daughter of Katherine Eicher (Kauffman) and Joseph Eicher. She was the middle child, with two older sisters, and two younger brothers. She helped on the farm and drove her dad’s Farmall H. She attended Tyler school, a one-room school, through 8th grade, then attended Colon High School, and graduated in 1952. That fall, she married Jack Bennett and they moved into a farm near Leonidas. They had four children. In 1961, they bought a farm north of Leonidas. Always interested in sports and outdoor activities, Esther played softball for the Leonidas girls’ team, rode motorcycles with the boys, and raced go carts. They made a runway on the farm for the neighbors to land their plane. It soon became the home of a little airport where 5 people learned to fly. She divorced, and then became the airport manager at Three Rivers Airport. She attended Glen Oaks Community College, where she graduated Suma Cum Laude with a degree in Arts. The college commissioned her for a painting, which hangs in the concourse of Glen Oaks. She won a scholarship from the Whirly Girls and was able to earn her commercial helicopter rating. She enjoyed racing airplanes with her flying friends. She kept her flight logs, and enjoyed looking through them reminiscing.
In 1977, she married James Wolf. They moved to Pontiac, MI, where Jim got a job at a large funeral home. They lived in an apartment above the funeral home for a number of years, then bought a house at Twin Lakes Village just west of the Oakland Pontiac Airport, where Esther had a job flying for private corporations.
In 1999, they moved back to Esther’s roots in the Burr Oak area at Eberhard Lake. They built their retirement home on the lake. Jim passed away in 2009. Esther continued living at the lake. She was a faithful member of Firm Foundation Ministries church, and enjoyed her friends and the services there.
She enjoyed her coffee klatch with a number of her Colon classmates. Esther enjoyed her garden and flowers, and made it a habit to eat breakfast near her martin house, and loved watching her birds. She loved spending time with her great-grandchildren. She was an avid reader and a collector of books by her many favorite authors.
She was preceded in death by her parents, siblings, and her son, James Bennett.
She is survived by her children, Terrence Bennett of Burr Oak, Frederic Bennett of Burr Oak, and Cherri Waters of Leonidas, her step-daughter Karen (David) Schaefer of Cincinnati, OH, her grandchildren, Melinda Bennett (Justin Miller) of Austin, TX, Amy Waters of Leonidas, Stacy (Jason) Schwenk of Centreville, Kaitlyn Schaefer and Samuel Schaefer of Cincinnati, OH; and her great-grandchildren Dustin, Brandon, Mia, and Anthony.

Memorials can be made to Colon Library & Wounded Warriors.

Cremation has taken place. A private celebration of Esther’s life will be held Firm Foundation Ministries, with immediate family only. Internment following at Locust Grove Cemetery. The funeral will be made available via live stream for extended family and public viewing courtesy of FFM.